Malawians, as a nation, are a friendly and generous people. It is their natural way of being and their genuine smiles are heart-warming.

English and Chichewa are the official languages in Malawi. English is understood by almost all the people in the country.

When you arrive in Malawi, you will be welcomed into the warm heart of Africa with a handshake which is the customary greeting – it can take the form of a number of styles and your hand may be held while you talk to the other person. Malawians are friendly people, it is their natural way of being and their genuine smiles are heart-warming.

Malawian families have a great sense of community, all duties and chores are shared. Families living side by side look after one another, giving a helping hand whenever needed. A cultural visit which involves a ‘home-stay’ in a village can be arranged just about anywhere and offers a wonderful way to experience traditional daily life in Malawi.

Malawians are known for their artistic skill and creativity when it comes to handcrafts. A great variety of items can be found which display traditional skills handed down through the generations and also new techniques.

There are a number of tribes such as the Maravi, Nyanja and Tumbuka in Malawi and each has added a particular aspect to traditional masks, dance moves, music (drums and rattles), clothing and also language.

The main ethnic group is the Chichewa. Music is strongly rooted in Malawian culture with inflection from the Yao tribe of Tanzania in the north and the Zulu in South Africa amongst others. 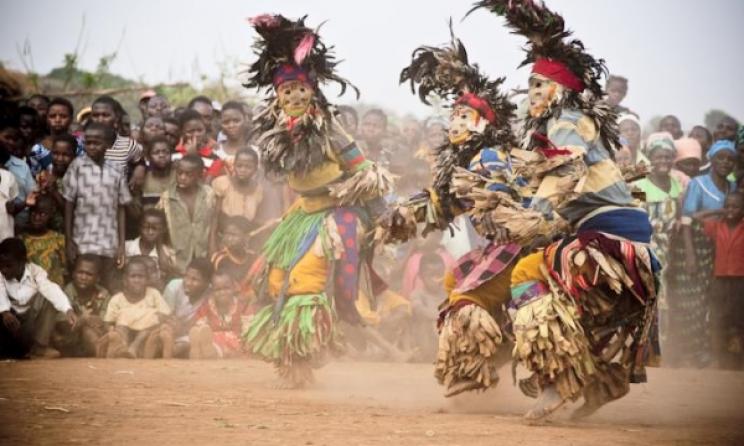 About 80% of the people in Malawi are Christian, with the rest being Muslim. There are a few Malawians who still practice traditional beliefs.

People and Culture of Malawi 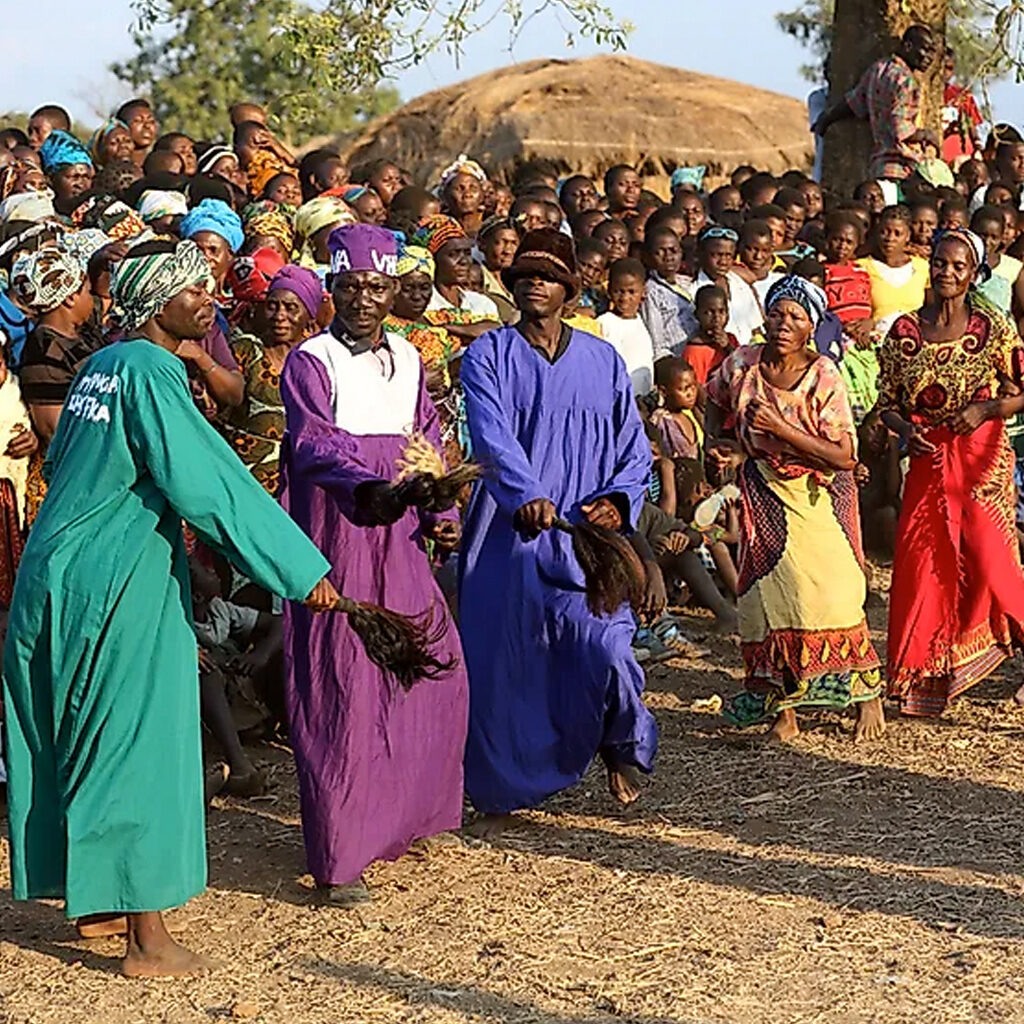 The Malawi people are of Bantu origin and comprise of many different ethnic groups. These include:

People from Chewa tribe are known as Achewa. The Chewa Tribe is an African culture that has existed since the beginning of the first millennium, A.D. Their local language is called Chichewa, Malawi national language. There are presently over 1.5 million Chewa throughout Malawi and Zambia, however the Chewa are not considered people of Malawi or Zambia; instead they are people from the Nyanja group of Bantu. In Malawi, the Chewa are predominantly concentrated within the central region, surrounding the capital city of Lilongwe. The Chewa believe that living things were created by God. “Gule Wamkulu” (Big Dances associated with masks), has become a sort of title for secret societies of traditional Chewa religious practices. The Gule Wamkulu ceremonies consist of formally organised dances to admire the remarkable physical abilities of these individuals (called “Nyau”). If one has the misfortune of passing a Gule on the road, traditional behaviour consists of dropping a few coins for the Gule – never handing them the money directly for fear they will grab you and take you to the cemetery for ritual purposes. Masks worn by the Gule Wamkulu include thousands of different representations – generally each developed hundreds of years ago by unique tribes, and accented with their own individual touch. Today, these masks, with their different origins, are part of what is now the Chewa culture.

TPeople from Yao tribe are known as Ayao. Most people from Liwonde and the southern lakeshore are from the Yao tribe; their language is called Chiyao. The Yao came to Malawi from Mozambique to escape conflict with the Makua tribe. The Makua tribe had become enemies of the Yao because of the wealth the Yao were amassing through trading ivory and slaves to Arabs from Zanzibar. The Yao began attacking both the Chewa and the Ngoni people to capture prisoners who they later sold as slaves. The Yao were the first group to use firearms in conflict with other tribes. In 1870 the Yao ruling class chose to follow Islam like their Arab trading partners rather than the traditional animism (‘animism’ is a philosophical, religious or spiritual idea that souls or spirits exist not only in humans and animals but also in plants, rocks, natural phenomena and geographic features such as mountains or rivers). As a benefit of their conversion to Islam, the Yao were provided with sheikhs who promoted literacy and founded mosques. This led to many Yao people believing in Islam, therefore, any person from a Yao tribe or anyone whose name is from Yao language is considered as a Muslim by Malawians. The Arab traders also introduced the cultivation of rice, which became a major crop in the lake region of Malawi.

People from this tribe are called Atumbuka. Tumbuka is the main tribe found in the northern region of Malawi (Viphya and Nyika). The Tumbuka are a Bantu ethnic group. Their language is Chitumbuku, a Bantu language similar in structure to Swahili. The chief god of Tumbuka traditional religion is Chiuta, an all-powerful, omniscient, self-created being. Chiuta literally translates as ‘Great Bow of Heaven’ or ‘Owner of All’ or ‘The Creator’. This tribe has got a higher percentage of educated people. Its people believe there is a direct link between dancing and the healing process; these curative dances are called Vimbuza. Traditional Doctors (Witchcraft Doctors) among the Tumbuka people use these dances to cure some diseases.

People from this tribe are called Atonga. The Tonga people live in Northern Malawi especially in Nkhata Bay. Their language is known as Chitonga. Traditionally, Tonga society was based on fishing, and cassava was their staple food. During colonial times, mission education enabled them to earn higher wages than other tribes and they often worked as porters and skilled or semi-skilled workers. Before Christianity their traditional religion was a religion of the dead, centred on the worship of ancestral spirits. They believed in diviners and spirit- possession, and they sought out those who communicated with the dead. The Tonga of Lake Malawi say that by taking certain medicines, a person can ensure his changing after death into whichever animal he wishes. The Tonga have adopted the Ngoni custom of marriage payment of cattle. Traditionally males can’t divorce their wives without a hearing of public repudiation, while she and her family, however, could dismiss him without formality, unless he had a wealthy or otherwise powerful family. Tonga people are said to be very smart and decent. People say that a Tonga would wear a jacket and a shirt which has only the front part and the collar without the whole back side (which has been worn out); in other words, wearing a jacket, tie and well fastened shirt is most important to them!

The Lomwe people are known as Alomwe. Many people living in Mulanje and Thyolo are from the “Lomwe” ethnic group and there main income generating activity is farming. The Lomwe are one of the four largest ethnic groups living in Malawi. Many Lomwe moved into Malawi in the 1930’s due to tribal wars in Mozambique. 90-95% of the Lomwe live in rural areas and in Mozambique many are concentrated in the Zambezi Province. The Lomwe language is called Chilomwe and it is written using the Roman alphabet and there are reported to be nine different dialects of Lomwe determined by location. Sadly the language is now dying out, with only the eldest still speaking it as a main language, many of the younger Lomwe tribe now speak in the Chichewa. The Lomwe people are well known for their talkativeness, their beliefs in the spirits of the dead and witchcraft. Many people therefore believe that the best Traditional Doctors are those from Mulanje. The famous Mulanje Mountain is also believed to be associated with Spirits of the dead especially at the highest peak of Sapitwa (which means “where you cannot go”). It is believed that people used to find food in the mountain of which one was not expected to tell anyone or invite a friend to eat as this would make the food disappear. During some of Lomwe traditional dances girls are supposed to wear only beads and nothing else to cover their breasts.

People from this tribe are called Angonde. The Ngonde and Nyakyusa migrated from the north, like other Bantu tribes and settled at the extreme north of Malawi near Karonga where they are still found today. The area was remote and as a result they did not suffer from Ngoni and Yao raids. The centre for the Ngonde people is the sacred Hill of Mbande, which stands in the bed of the Rukulu River, about 13 km from Lake Malawi. Their language is known as Kyangonde. There are approximately 300,000 Ngonde in Malawi (Johnstone 1993).

Embassy of malawi © 2022. All Rights Reserved